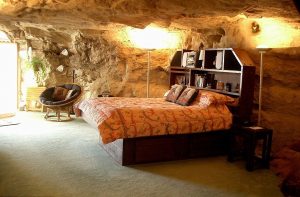 This is one of the most unusual hotels which is located in the depths of the white cave. In the 1980s he built a married couple Bruce and Marge black, who moved to Farmington in new Mexico. Education Bruce a geologist, he always wanted to live in some unusual place, and so began to discuss how to transform the space of the caves under the dwelling. 15 years later in 1996 the work was completed and the family finally moved into the cave. Seeing that their way of life attracts the attention of tourists the couple decided to open a fancy hotel. What is more remarkable age of caves, estimated to be about 65 million years.